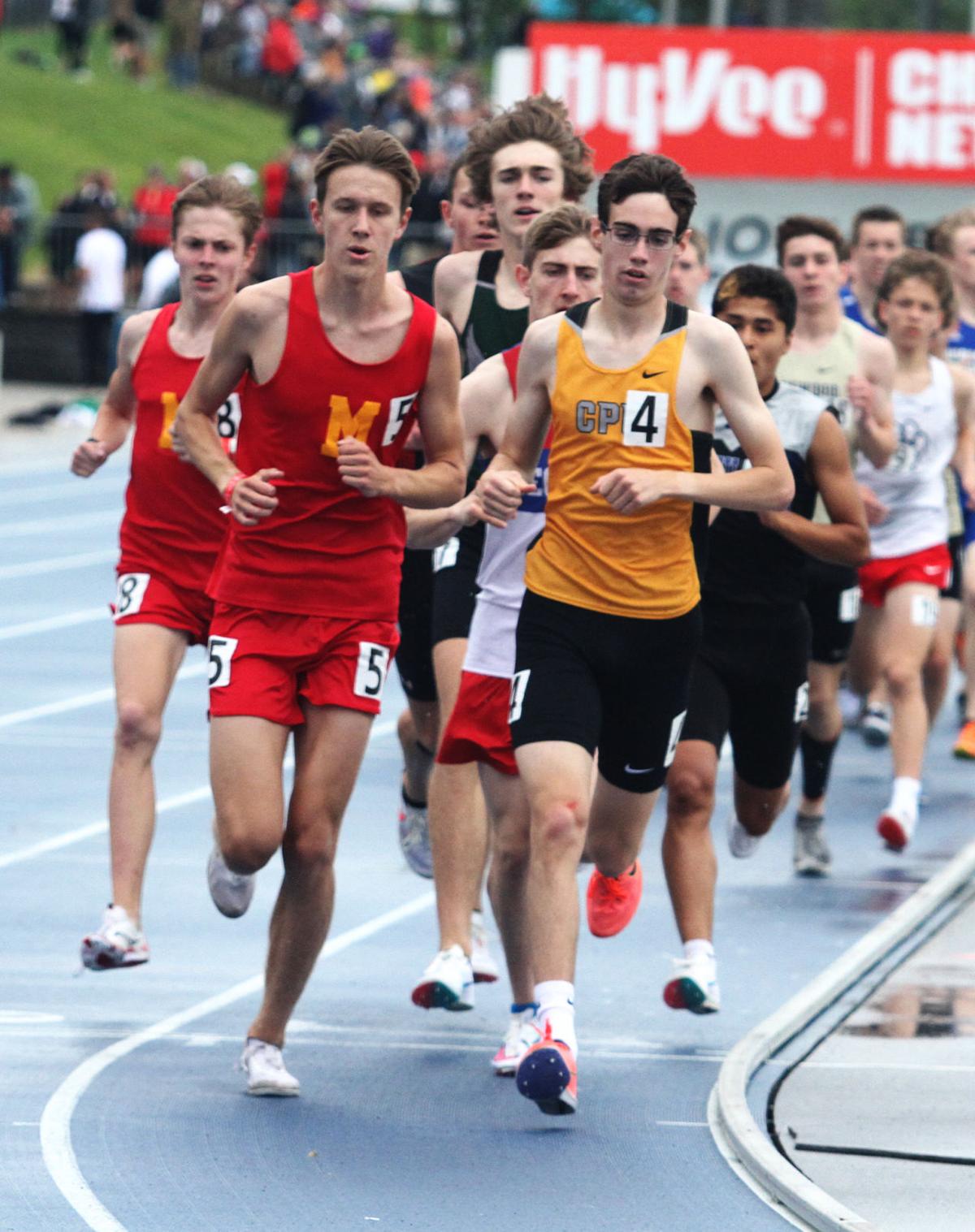 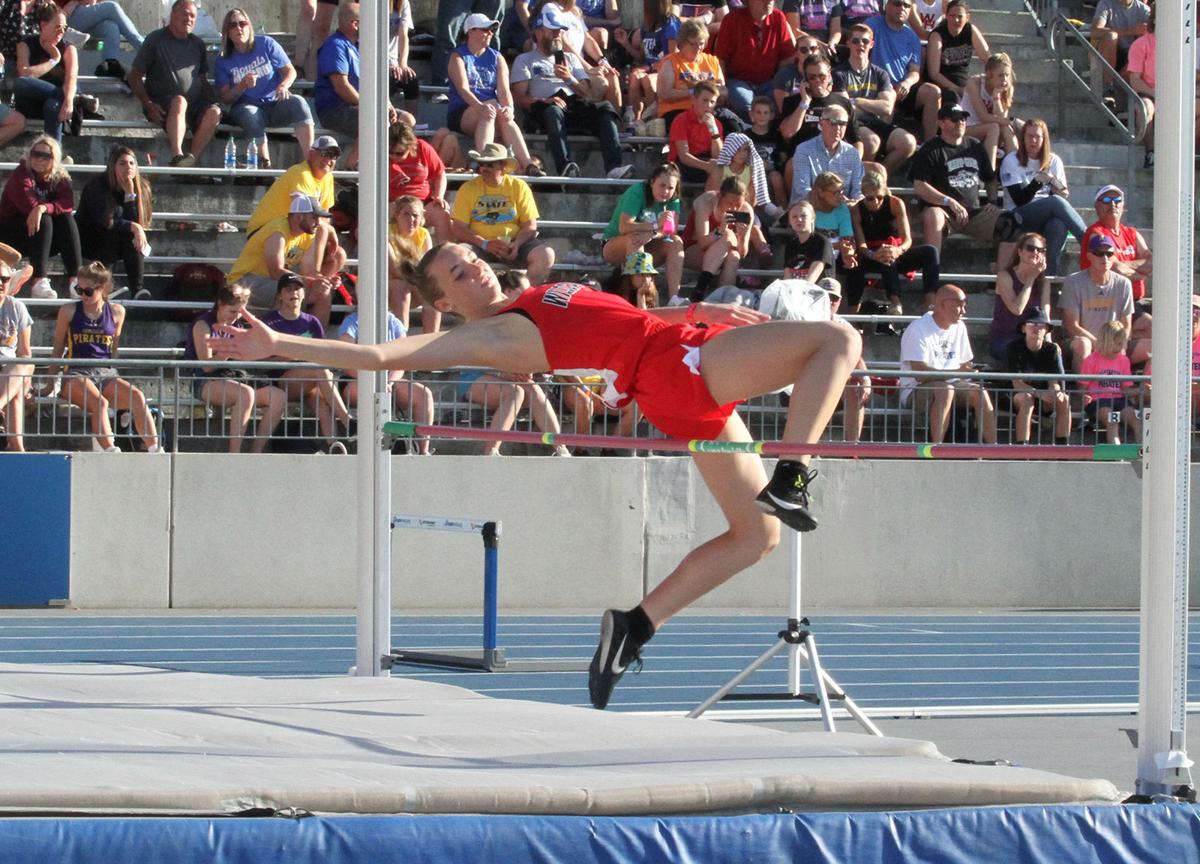 Central City’s Emma Fritcher with a jump of 4-08 finishes in 21st place in the 1A girls high jump at this years state track meet held on May 21st at Drake stadium. 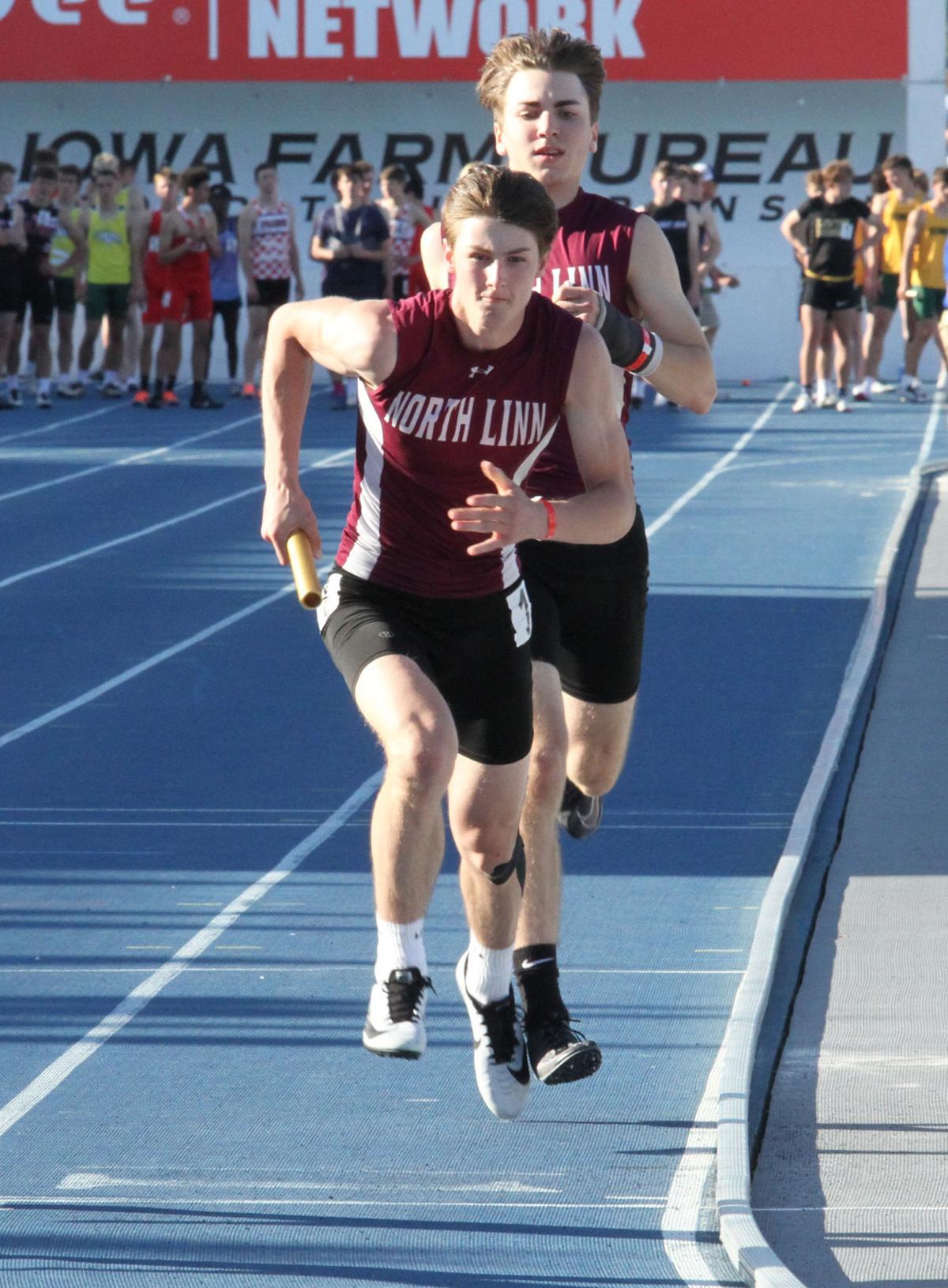 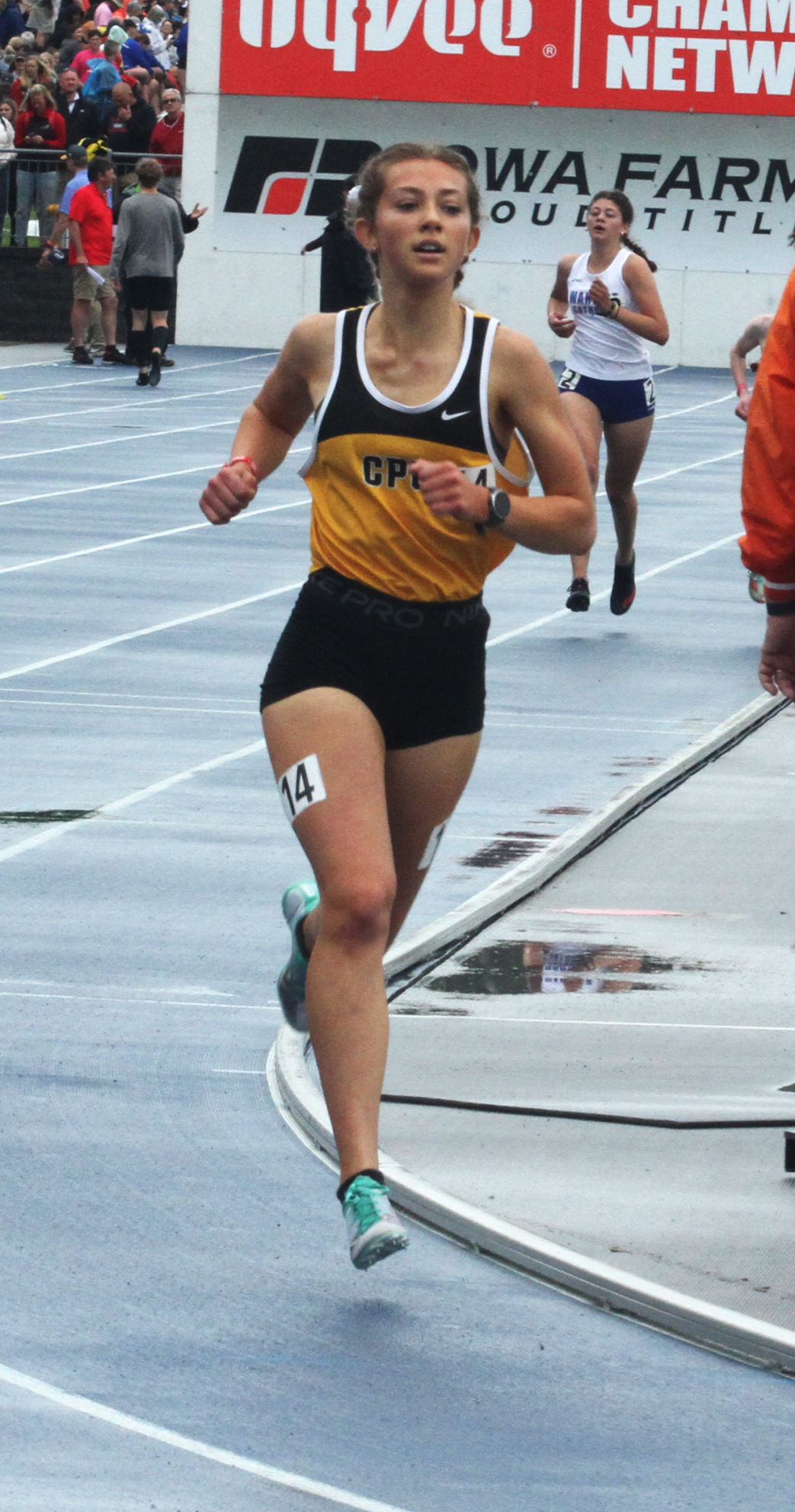 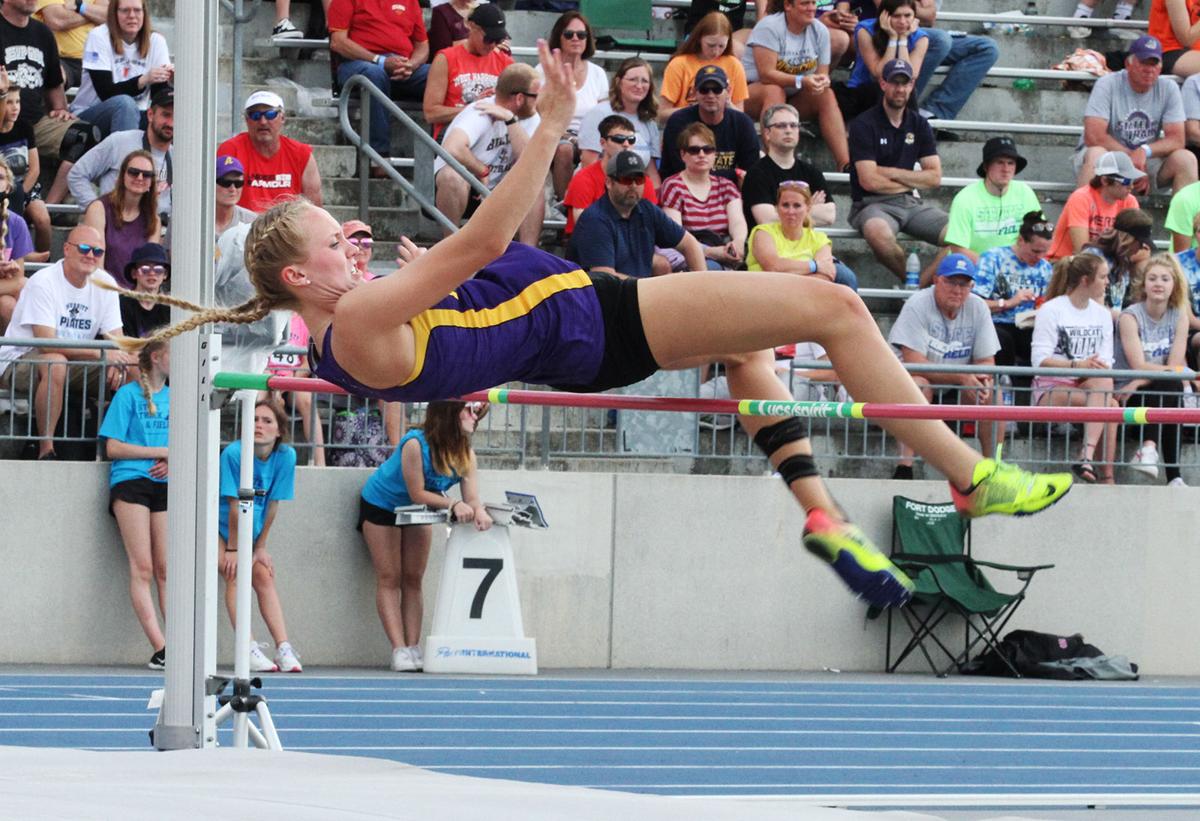 Alburnett’s Hailey Carolan jumps to a silver medal finish of 5-02 at this years state track meet held on May 21 at Drake stadium. 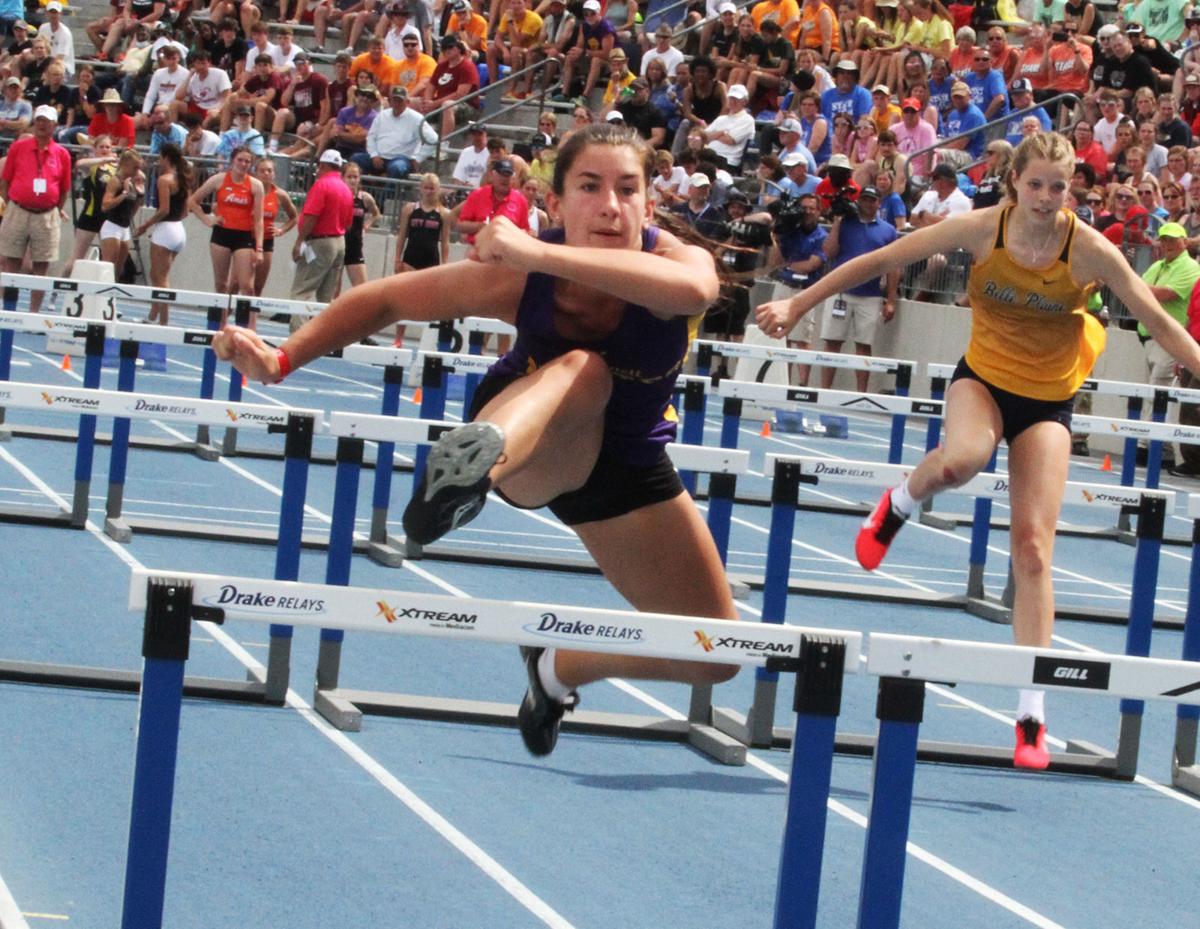 Alivia Miller of Alburnett helps their girls Shuttle Hurdle Relay team to a third place finish at this years state meet on the blue oval.

Central City’s Emma Fritcher with a jump of 4-08 finishes in 21st place in the 1A girls high jump at this years state track meet held on May 21st at Drake stadium.

Alburnett’s Hailey Carolan jumps to a silver medal finish of 5-02 at this years state track meet held on May 21 at Drake stadium.

Alivia Miller of Alburnett helps their girls Shuttle Hurdle Relay team to a third place finish at this years state meet on the blue oval.

For many of the athletes, this was their first time encountering the aura and weather that surrounds Drake Stadium and 3 days-in-May. This was the case at the 2021 state meet that encountered rain, thunderstorms and humid weather all three days of competition.

Alburnett Girls TrackHighlighting the lady Pirates was Hailey Carolan who jumped 5-2 for a second-place finish in the high jump. She stayed focused on her goal to medal throughout the very long high jumping event. Because it ran so long, the Pirates had to make a substitution on their 4x400m relay team so she could finish the high jump. Savannah Caves stepped up to run very well for Carolan, along with teammates; Lacey Neighbor, Gralynn Martin, and Megan Neighbor. That’s the first time the Alburnett girls team had to substitute a runner at the state meet, and they had about 20 minutes notice to mentally and physically get ready for the switch. They finished in 20th place at 4:24.74. The 4x200m relay team finished in 22nd with a time of 1:54.40.

Head coach Keevan Kaestner commented, “Though they initially thought I was joking, they rose to the occasion and ran very well. Only four of the 10 qualifiers had ever run at the state meet before. The upperclassman really showed the underclassman what it is like to go compete and succeed with PRs at the state meet.”

The shuttle hurdle team of Lilly Winterowd, Lacey Neighbor, Alivia Miller, and Carolan ran a school record 1:09.93 in the prelims in the pouring rain. They were seeded third going into the finals on Saturday where they ran another school record time of 1:09.58 for the bronze medal.

“They have been extremely dedicated to their hurdle practice, and it showed with their huge improvements.” commented Kaestner

The sprint medley quartet of Megan Neighbor, Martin, Lacey Neighbor, and Carolan moved from a 22nd seed to a 12th place finish with a PR of 1:56.06.

Graubard and Miller both were in the top flight for long jump, but did not jump how they wanted. Graubard finished in tenth with a jump of 15-00.25, and Miller placed 21st at 14-01.25.

“What a fun weekend of state track! So good to be back running on the blue oval! I am so proud of our girls, but we have to say goodbye to two amazing seniors, Madison Graubard and Megan Neighbor. These multi-time state qualifiers have been integral in our team’s success over their years of HS track. They have an amazing work ethic and are the sweetest kiddos and teammates. I have truly loved coaching them, and am so grateful that they got to have their senior year of track.” said Kaestner

Alburnett Boys trackThe Pirates brought four relay teams and had four individuals qualify for this year’s state meet. Gavin Soukup led off the Pirates on Thursday in the long jump with a jump of 19-08.24, one spot way from a medal. Hunter Caves knows exactly how Stallman felt as he also finished in ninth place in the 400m dash with a time of 50.90. Reed Stallman with a throw of 135-06, which was a new PR finished in 18th place in the discus and Shane Neighbor placed 12th in the 400m hurdles with a time of 58.49.

As they have all season the Pirate relay teams have been breaking their own PRs week in and week out. This was the case again this week at the state meet when the 4x200 team of Braydon Osborn, Gavin Soukup, Shane Neighbor and Hunter Caves broke their own PR and school record with a time of 1:33.46 for 11th place. The top relay finish came from the 4x400 relay team of Neighbor, Soukup, Kale Rose and Caves who finished in sixth place with a time of 3:31.86. The SMR relay team took home another top eight finish for the Pirates with a time of 1:36.95. The 4x800m relay team placed 24th with a time of 9:01.04.

Following the race Larson commented he was pleased with his finish, “My goal coming in was a top eighth finish and I accomplished that. But my real concern throughout the race was for my running mate Bach who had not been feeling well all week.” Bach ran a time of 4:46.99 for 21st place.

The DMR team of Kramer, Cole Werner, Logan Peterson, and Larson ran a time of 3:40.84. It was good for a 14th place finish in a loaded field.

“I couldn’t believe all the crazy splits that were going on in that race.” commented head coach Jeff Engen

The SMR team of Kramer, Dylan Griswold, Peterson, and Werner looked really good other than one hand off was a little sloppy. They ran a time of 1:37.59 for 20th.

“Overall, it was a good way to end the year. I’m really proud of all the boys. They worked hard for us and continued to get better all year.” commented Engen

CPU Girls TrackThe Pointer took nine total events to the 2021 state track meet with their top performance coming from Kay Fett in the 3000m run with an eighth-place finish at 10:46.02. She was joined by teammate Emma Wilkerson who finished in 21st place with a time of 11:40.98.

Following the race Fett commented, “I kept getting blocked in and I need to do a better job at working on my breathing when in a bunch like that with no place to go. I have been training all season to maintain my speed and muscle and be sure to have fun.”

Key losses from these state participants include: Claire Neighbor and Shae Hansen due to graduation. The rest of the team will return in 2022 in what is expected to be a very strong team.

Central City Girls TrackEmma Fritcher was the lone athlete to come from Wildcat country qualifying in the long jump. Sometimes nerves can get to you especially when it is on the big stage on the blue oval at the state meet. Fritcher placed 21st with a jump of 4-08. Not near her best result of the season.

Fritcher commented, “I felt a little nervous going in and felt I could have done a little better. I am honored to be representing Central City at the state track meet as our only qualifier and had a wonderful experience here at the state meet with my fellow competitors.”

Head Coach Cindy McCarthy commented, “Unfortunately, Emma didn’t do as well at state as we had both hoped, she had a great week up practice before we went down on Friday. I am very proud of her accomplishments this year, she stepped up when she had to at the state qualifying meet. Making it to state is a great accomplishment and I know she was disappointed, but reflecting back she should be proud of what she did.”

North Linn Girls TrackFreshman Skylar Benesh qualified in both the long jump and also the 100m dash. In the long jump Skylar finished jumping 15-03 which was good enough for eighth place. She tweaked her ankle a little on the first jump but was able to keep her remaining jumps in the same range.

Skylar commented after, “I felt nervous coming in and twisting my ankle on the first jump didn’t help, but I feel pretty good finishing in the top eight in my first time at state.”

Skylar Benesh also ran in the 100m dash where she ran a 12:44 in the prelims giving her a 19th place finish.

Following the 100m dash she commented, “I just didn’t feel I ran my best race, but the experience I have had at state is something I will not forget and I am looking forward to next season.”

Senior Kaitlyn Sommerfelt was able to bring home a 22nd place finish in the 800 meters with a time of 2:31.86. She also anchored the DMR team of Jaden Benesh, Macy Boge and Olivia Rauch to a 21st place finish at 4:34.59.

The Shuttle hurdle relay team of Rauch, VanEtten, Ella Ries and Caitlyn Benesh placed 15th with a time of 1:14.48 in the prelims but were unable to advance to the finals.

North Linn Boys TrackThe boys brought a strong contingent of relay teams into the 2021 state meet with four events qualifying, along with Josh Bean in the 400m hurdles, who with a time of 58.57 placed 13th.

Highlighting the week at the state meet for the Lynx boys was an outstanding third place finish by the quartet of Austin Hilmer, Ben Wheatley, Cade Haughenbury and Kaleb Kurt in the DMR with a time of 3:40.82 which was a new PR for them.

Following the race, the boys commented that they knew they had a really good chance at a top five finish with Cade coming into the race fresh and felt a PR was possible.

Head coach Jared Collum said, “I thought all our kids ran really well at state. D Med ran out of their minds going from 13th seed to placing third. They cut eight seconds off their PR. Josh Bean ran way over his seed in the 400 lows.”

On a personal note, I would like to thank Amy Neighbor and Susan Gehring for their help in supplying some photos this spring.