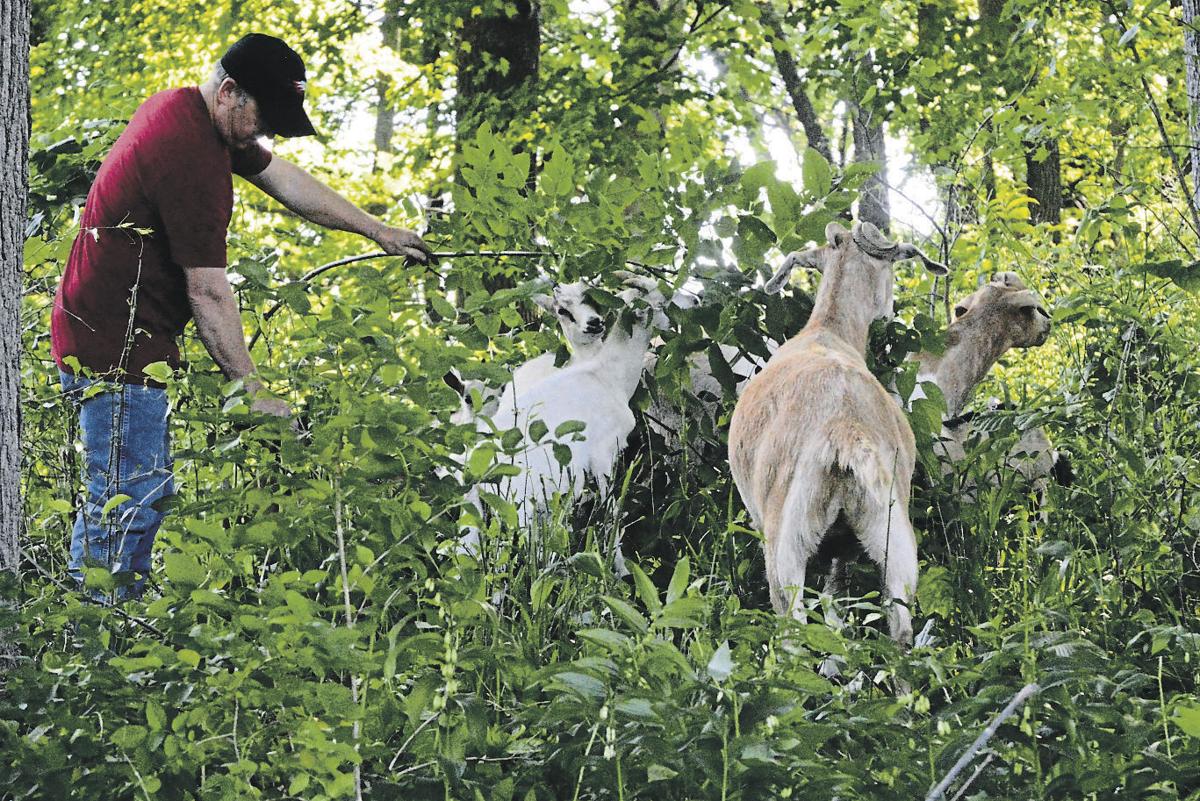 Heath Allard helps the goats reach a sapling that needs to be removed in the 2.5 acre space at Cornell College. 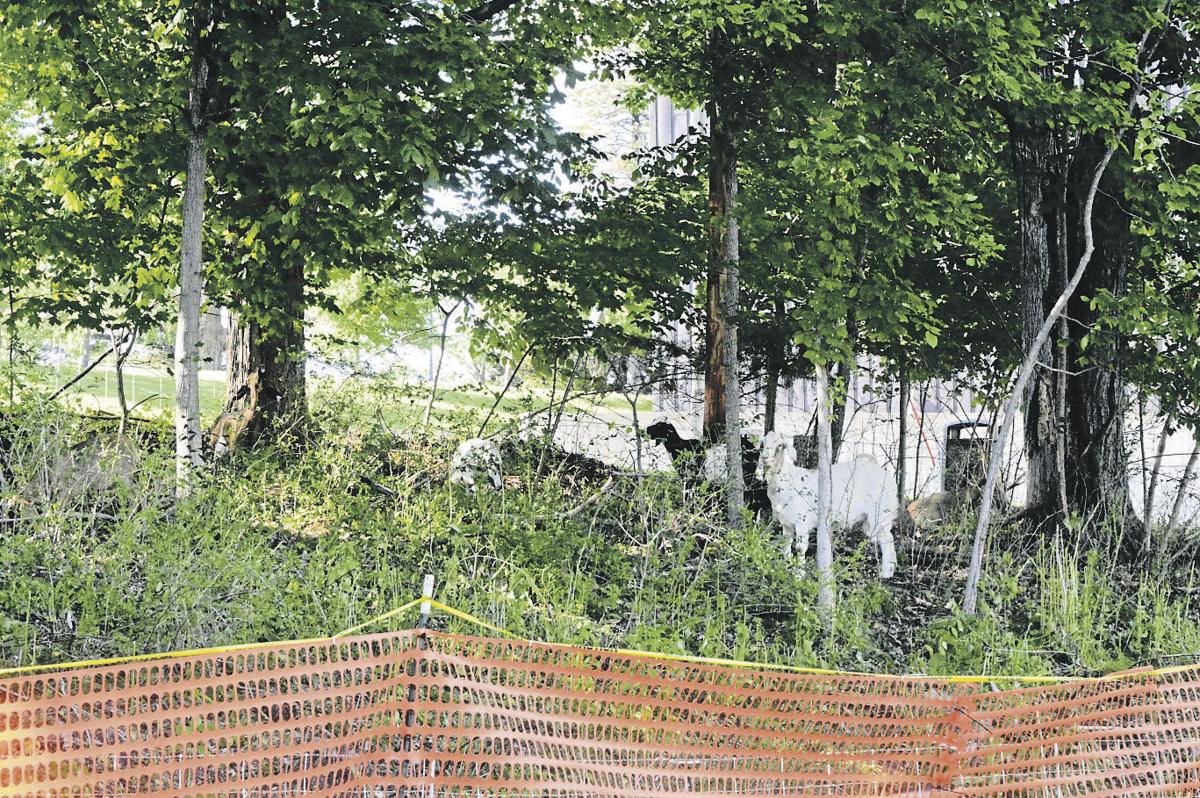 Goats resting in an area where they’ve made good headwy in cleaning some of the brush and underbrush at Cornell College this summer. 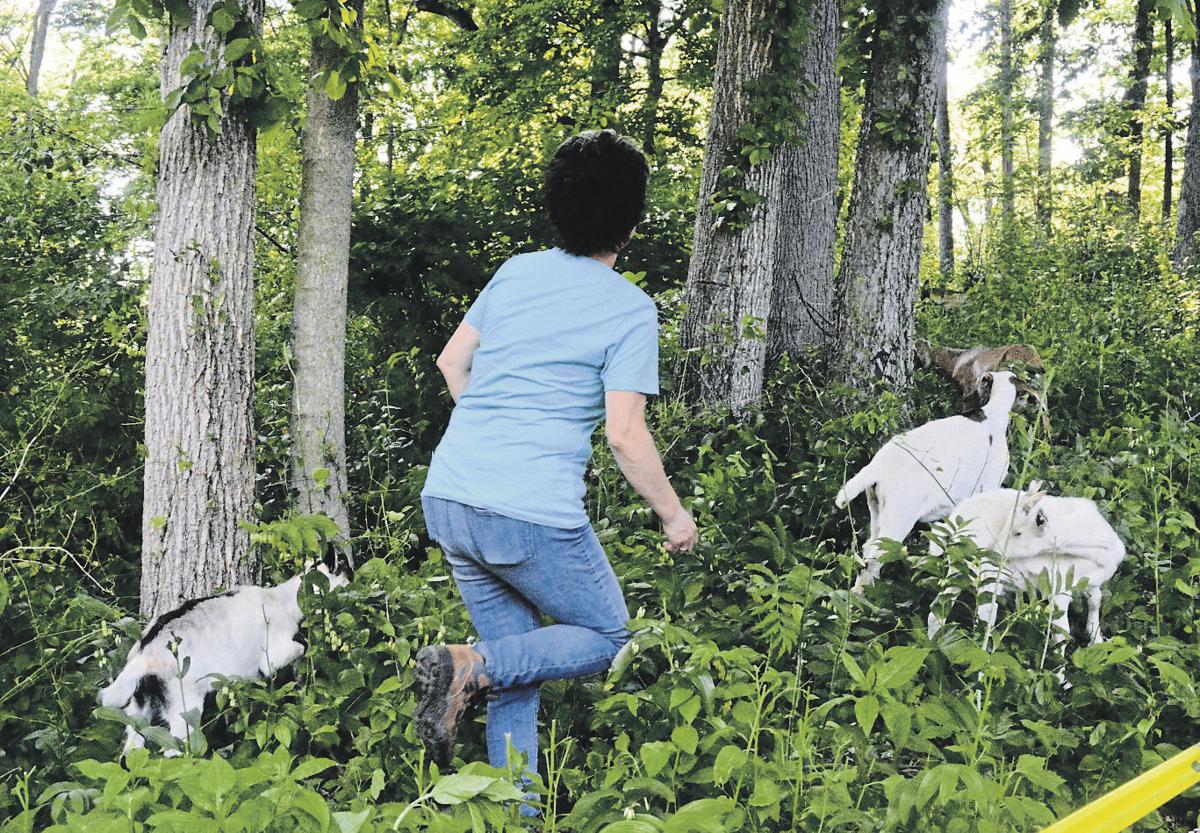 Jamie Allard pointing out some of the areas the goats have cleared off, including some poison ivy crawling up one of the trees. 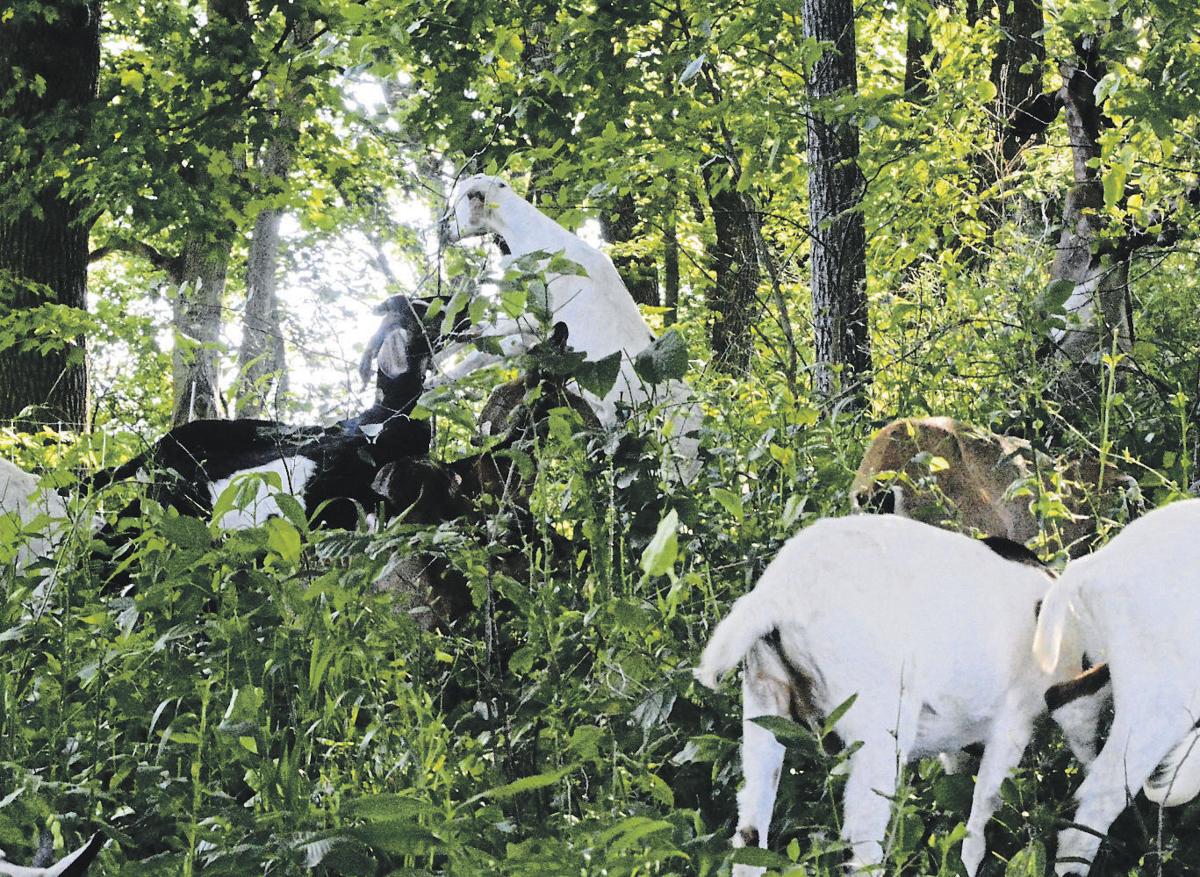 Goats work together to start taking down leaves on a sapling at the 2.5 acres at Cornell College they’re tasked with clearing. 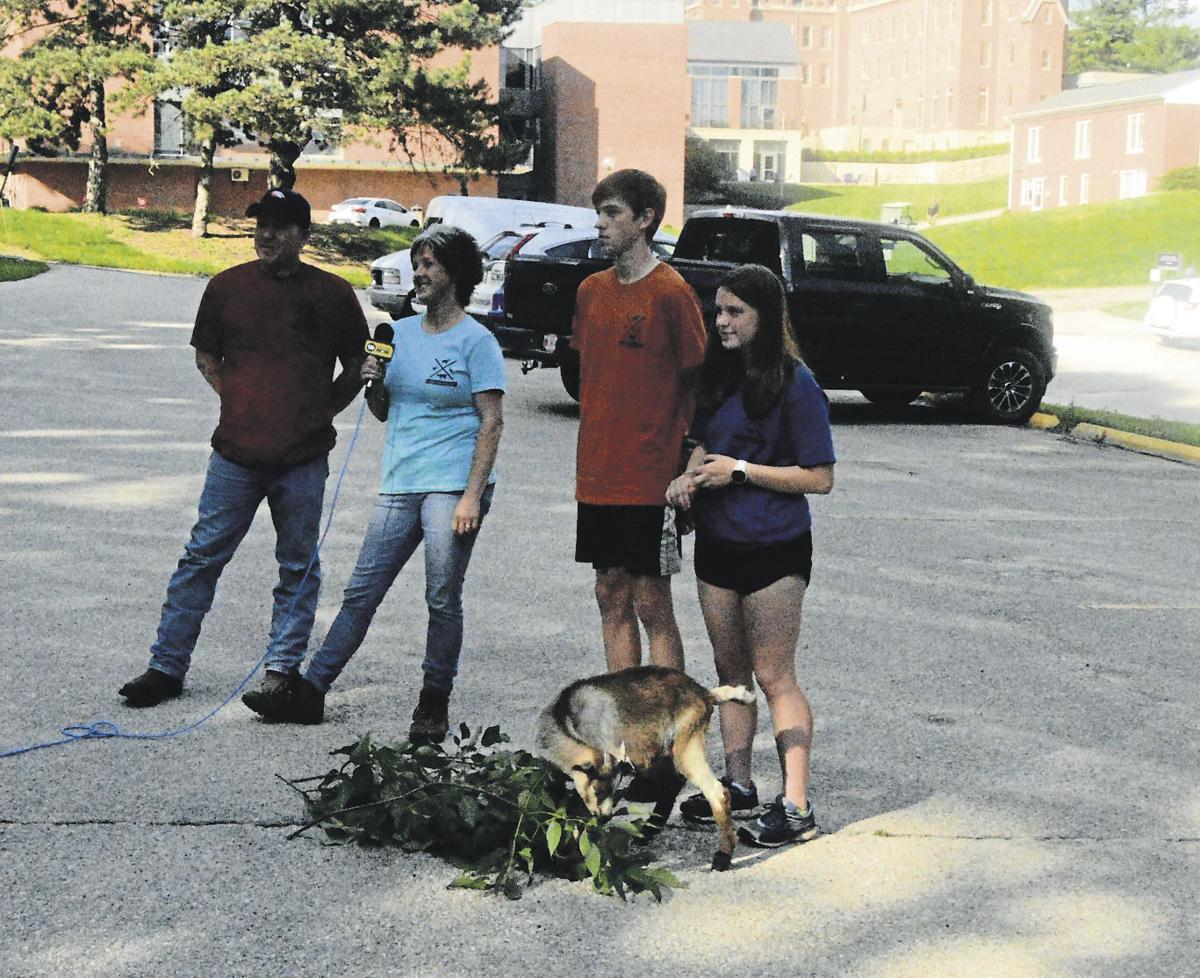 Heath, Jamie, Harrison and Tori along with goat No-Bake share with KGAN about the project Wednesday afternoon at Cornell College.

For Scott Ladwig, project manager at Cornell College, the most recent solution to an invasive weed issue the college has been having has brought a huge smile to his face every day this week.

The solution – letting goats forage on the two-acre space of leaves, weeds and young saplings in an area south of Cornell College’s Thomas Commons. The area has also been a habitat of garlic mustard seed, an invasive species of plants that are inhospitable to butterfly larvae.

“The last few days, it’s been so therapeutic for me to come and watch these goats work at cleaning up this area,” Ladwig said.

Maintaining that area on Cornell’s campus has vexed ground crews, as it abuts the backyards of several residential properties.

Ladwig said there’s been no easy solutions. Other strategies for clearing the area have drawbacks.

Bringing in a tractor to till the land? You run the chances of compacting or tearing up a residential lawn, and there’s still a good chance the plants you tore up a year ago will come back the next year.

Spraying chemicals to kill some of the more invasive species? There’s a chance that chemical runoff could impact people downhill from the site, and many neighbors are opposed to it.

Potentially burning the affected area? The two acres of land is surrounded by residential properties and in the middle of town.

Cue a local Goats on the Go franchise operating in the area as the solution.

Heath and Jamie Allard of Ely with RoyAn Ridge Farm started a targeted grazing farm of goats in the area in 2020. This year is the first year their flock is tackling some bigger projects.

The Allard family got into raising goats nearly five years ago.

“We were looking for an animal that could provide some milk we could use in cooking, and for our children to be able to show and raise for 4-H,” Jamie said. “We just started with this as a hobby farm.”

Over the past several years, the side farm for the Allard family has now grown to 67 goats, and Heath said they are looking to potentially be at 100 goats by 2022.

The idea to sign up as part of Goats on the Go affiliate came when Jamie saw a paddock of goats in an electrified fence in 2018 cleaning up weeds on a property in the area.

“I thought she was crazy when she proposed the idea initially,” Heath said. “We looked into it and officially signed papers with Goats on the Go towards the end of 2019.”

In 2020, the goats from the Allards farm had their first grazing season, helping with weed control for properties in the Iowa City and Coralville areas, especially along some of the Lake MacBride areas.

As an affiliate of Goats on the Go, the Allard family’s territory is currently in Linn, Cedar and Jones Counties, as well as Johnson County north of Interstate 80.

The Allards said that a herd of 30 to 40 goats will forage an acre of land in roughly four to five days, and they expect this project at Cornell College to take roughly two weeks to be completed.

While there are a few plants goats will avoid eating because of toxicity, they’ll eat almost anything else, including that garlic mustard plant.

Jamie indicated areas where the goats had eaten some poison ivy that crawled up a tree, or the teamwork the goats were exhibiting to pull down a sapling and munch and graze on Wednesday evening. Heath explained that the goats usually start at the top of an area and work their way downhill.

The Allards are responsible for making sure the goats are watered each day.

“What’s happening is on this project, those 15 minute trips to replace the water for these goats have turned into an hour or two of visiting with people who came to check out the goats,” Jaime said.

Within days of the goats working on the northern portion of the weeds near the H parking lot, Ladwig can already see a difference.

Ladwig noted that this was probably one of the most eco-friendly solutions to the invasive weeds issues that could be found as well.

“This is just nature doing what nature would normally do,” Ladwig said.

Unlike birds who might forage on some plants and seeds, when birds defecate, there’s a chance for those seeds to be replanted where that scat lands. With goats, their digestion of the plants makes those same seeds inert.

Ladwig noted that while Cornell College might be the first people in the area trying out Goats on the Go foraging, there are others in the Mount Vernon and Lisbon community who are looking at this solution for problem areas with invasive species.

After the grazing is finished, staff will be able to more easily get in, survey and clean up some of the damage left behind by the derecho in the fall of 2020.

The goats have interacted previously with the public. This past winter the family had been offering cuddle time and feedings with baby goats — a way to give back to the community in more than one way.

The family had asked Johnson County Fair Board where they needed help this year, and the fair board noted the scholarship fund could use donations. Over the course of the winter, the Allards raised more than $1,300 for that scholarship fund with people donating to feed a baby goat or coming to spend 30 minutes with the goat on the weekends. It’s something they’re looking to continue this coming year as well.

While Heath and Jamie have other full-time jobs, this new job does take a little bit of their time during the summer.

Their children, Tori and Harrison, help with some of the goat handling during the summer months.

For the kids, it’s a chance to work with these animals and get them ready for showing at the local fairs.

“It’s also a great way to come talk to people and educate them about goats,” Tori said.

Tori noted working with the animals in an environment like the wooded area at Cornell makes them easier to work with and get them ready to show in the arenas.

“It gets so much easier to handle them when you’re working alongside them,” agreed Harrison.

Harrison’s favorite part of working with the goats is definitely attending fairs with them.

For Tori, it’s interacting with the animals.

Goats on the Go was an organization started in Ames. The business has now expanded to two countries and more than 13 different states with different affiliates.