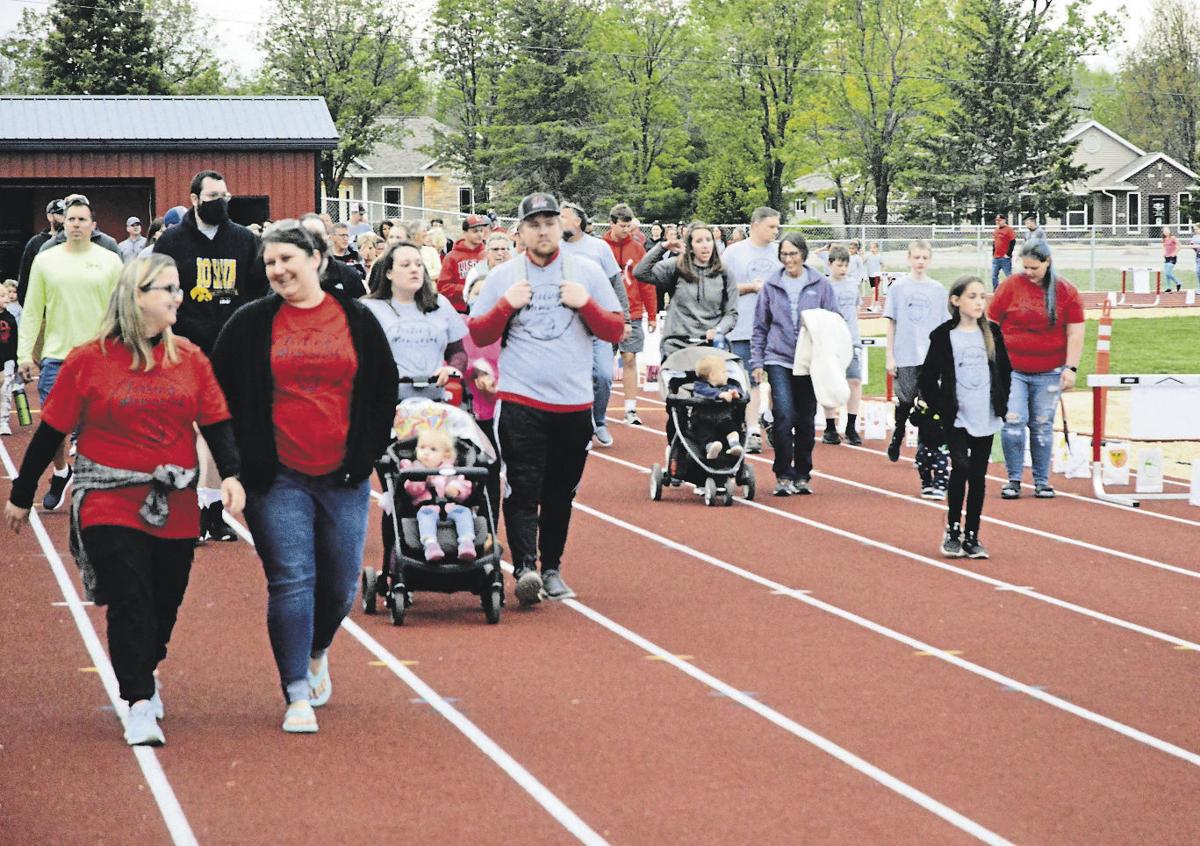 Members of the community take part in the Teeling Memorial Walk-A-Thon at the Lisbon track Friday, May 14. More than $20,000 was raised at the event this year. 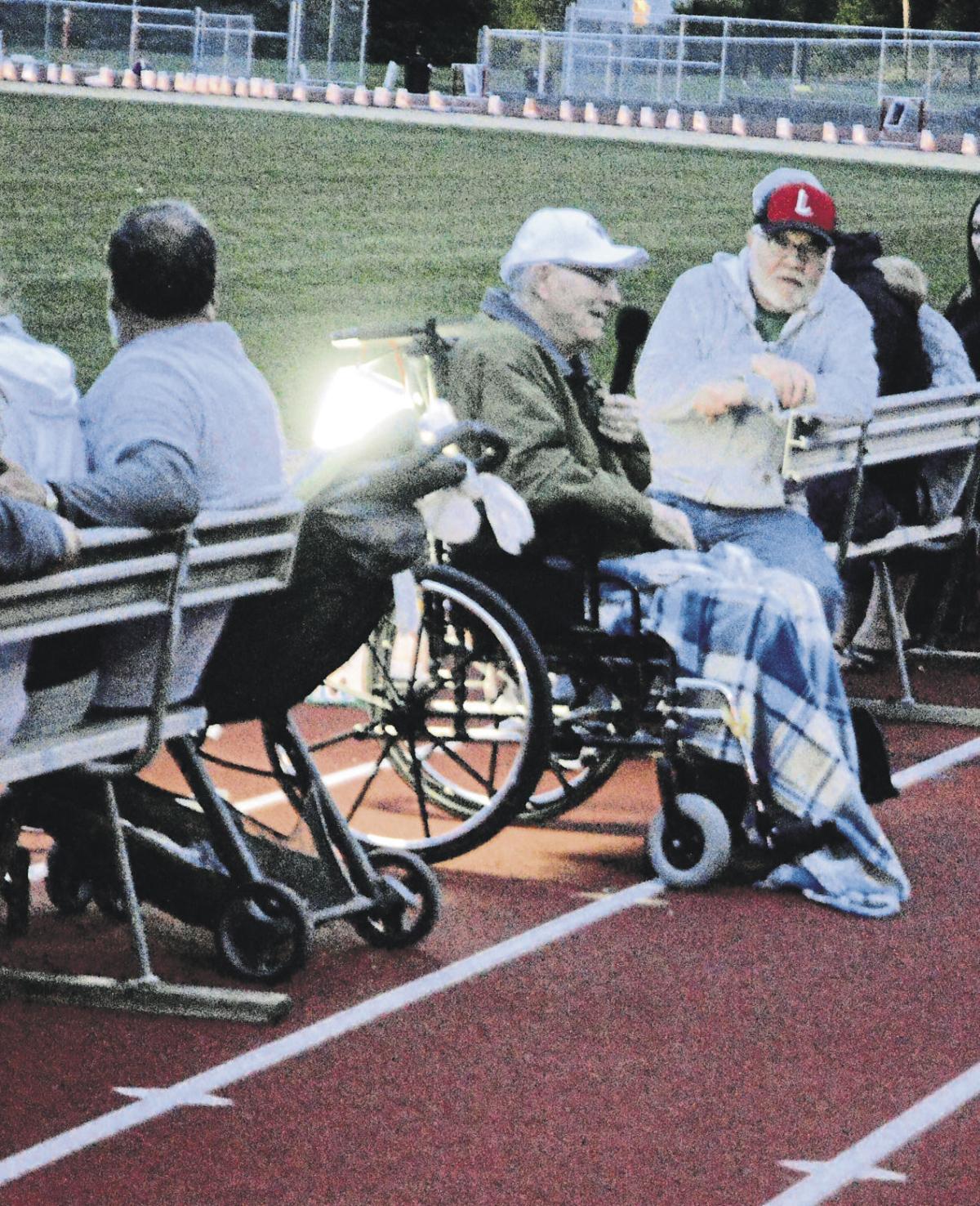 Lester Teeling speaks at the memorial service for his son, Roger, Friday, May 14, at Lisbon track. 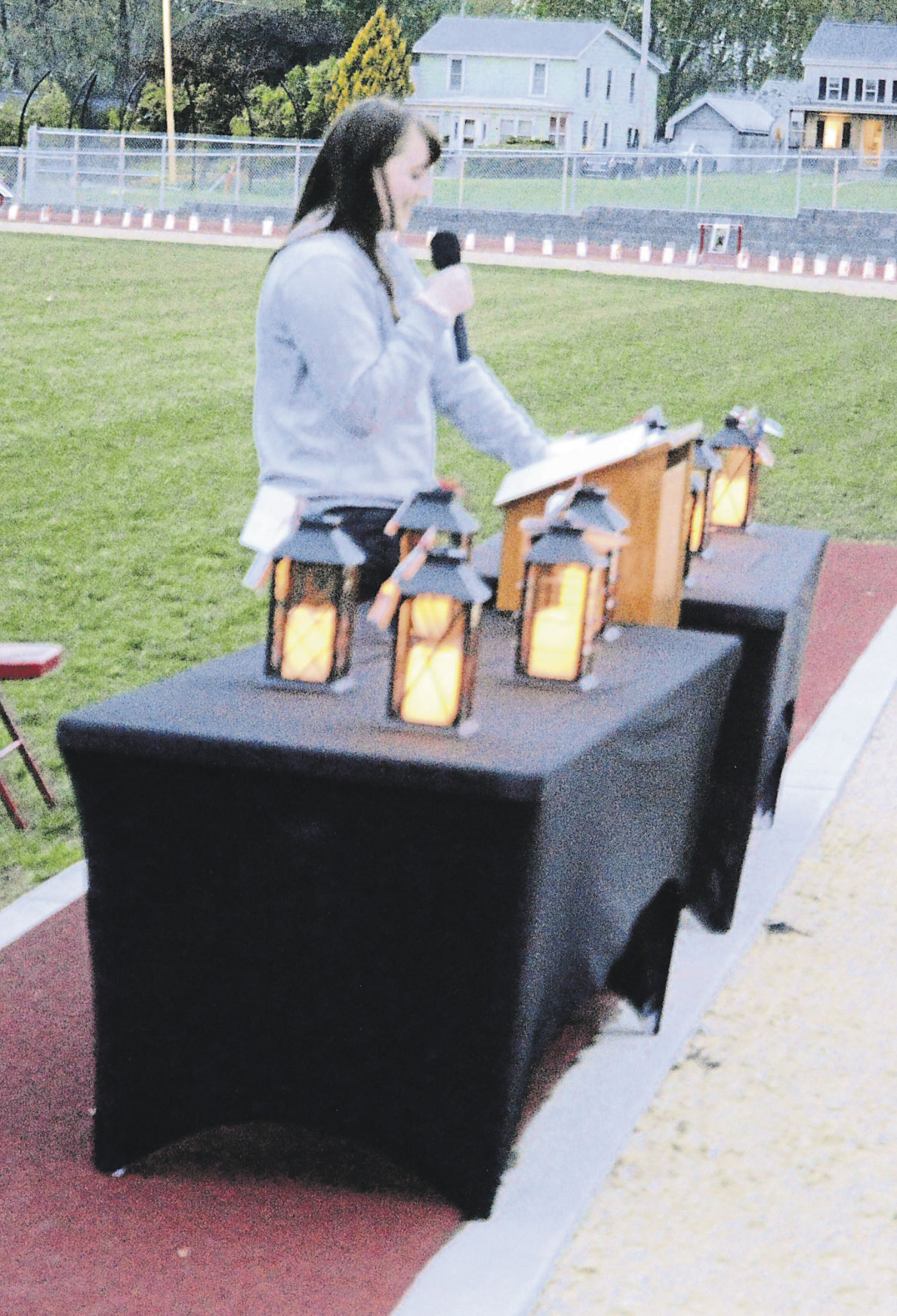 Brynn Teeling, Roger’s daughter, speaks at the memorial service for her father. 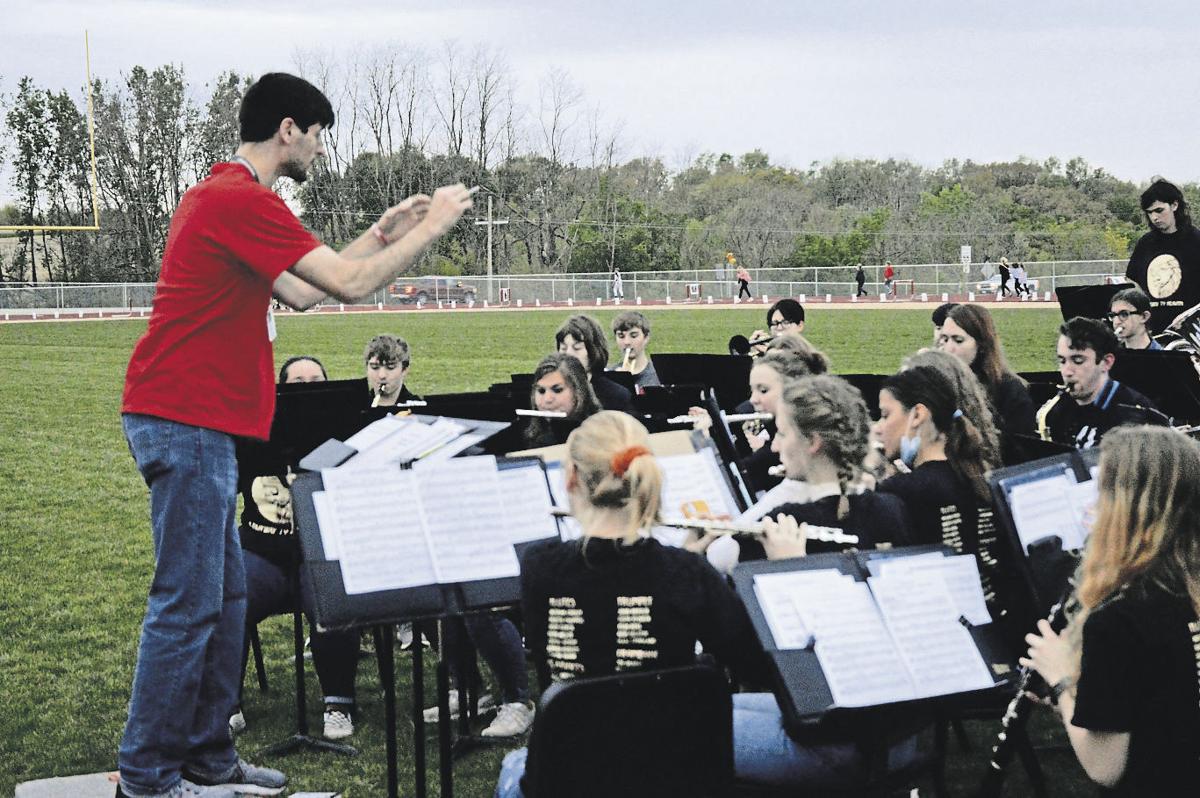 The Lisbon High School band, under the direction of Joseph Arch, played music to lead into the memorial service and a medley at the beginning of the service. 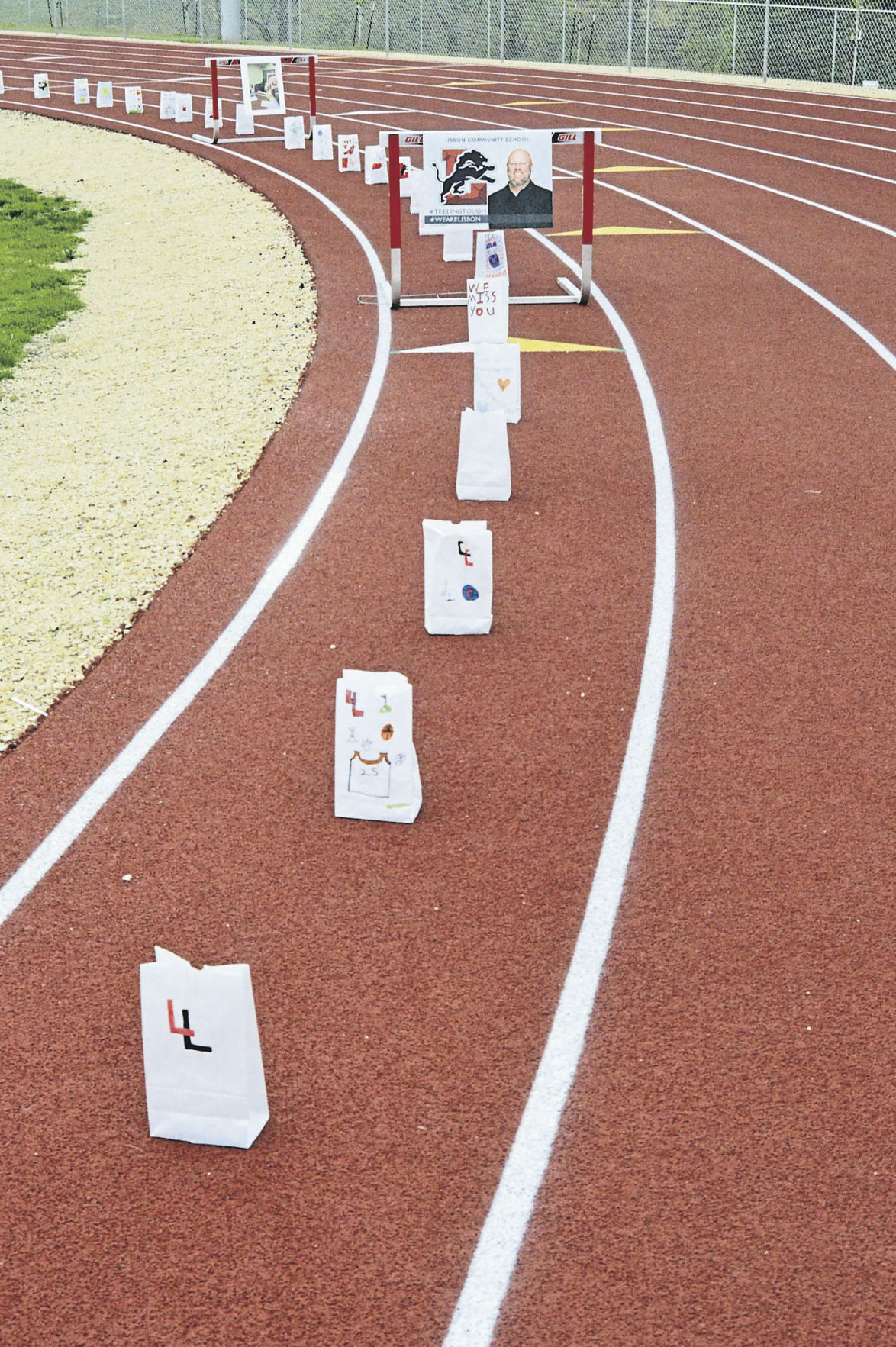 Luminarias, decorated by students at Lisbon schools, lined the inside of the track. Photos from Roger’s 15 years as administrator were hung on hurdles around the track as well.

Scores of people gathered to honor Roger Teeling, the Lisbon Elementary principal who died last spring. He was remembered as a beloved father, son, brother, teacher, coach, friend and principal Friday, May 14, for the first ever Roger Teeling Memorial Walk-A-Thon.

Throughout the school day, students at Lisbon were able to participate in walks around the track and decorate luminarias that lined the inside of the track.

Following the 45 minutes of walking around the track, a memorial service for Teeling was held.

Rev. Joshua Swaim of Lisbon United Methodist Church noted that Roger Teeling was one of those men who shined the light of their good works to the benefit of all in the community. Swaim encouraged others to let their lights shine before others.

Lisbon School Board president David Prasil served as master of ceremonies for the evening.

“Who else would have risked sleeping on the roof of the elementary school if their kids were able to raise their test scores? Prasil said. “That was Roger, though. He would speak beamingly about the work his kiddos were doing. He was always talking about his kiddos.”

Prasil recalled the numerous phone calls he’d get from Roger seeking a substitute teacher at the school, a job Kay Prasil routinely followed.

Brynn Teeling, daughter of Roger, thanked the community for the outpouring of support following her father’s passing and the walk-a-thon event.

“Obviously, Dad’s passing has been hard, but all of you have made this a little bit better,” Brynn said.

Brynn recounted the passion that Roger would have for going to PBIS assemblies at the school, and the excitement he’d have, even if it meant he’d end up with a beard full of whipped cream because his students had beat the goal they’d set on test scores.

“He loved his job,” Brynn said.

Brynn said there isn’t a day that doesn’t go by that she doesn’t feel the tremendous loss of her father, in big and small ways, but that sadness was buoyed by how much Roger was loved and is still loved in the Lisbon community.

Lester Teeling, Roger’s father, spoke about two important conversations he and Roger had in Roger’s life.

The first was in middle school, when Roger fell behind academically in English classes. Lester, a longtime English teacher, was upset by that, and reminded Roger that the sports and other activities he was involved with came second to his studies.

The second was when Roger entered the administrator program, where Lester gave him advice.

Lester recalled the last time he and Roger spoke was the night before Roger went in for a test last April.

“Life goes on after someone passes, and Lisbon has helped that,” Lester said. “There hasn’t been anyone who has had a bad word to say about Roger, and many of his students had wonderful memories of Roger. I’m just blown away by the support and turnout at this event. I really don’t think Roger ever would have considered leaving this school district. He loved it here.”

Prasil noted students and the community raised more than $20,000 for the first annual memorial walk-a-thon, and money will be spent on installing memorial benches around the exterior of the building this summer, to be completed by Aug. 1.

Roger’s brother, David, noted that Roger was a great friend, a terrific teammate, a great person to play golf with, and an accomplished administrator and beloved family man. He ended by calling Roger’s old cell phone to hear Roger’s voicemail greeting.

“We all miss you, brother,” David said.